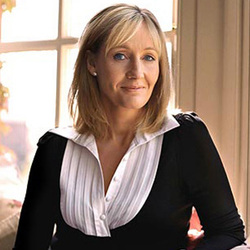 J.K. Rowling soared to fame with the development of the Harry Potter series. Rowling was not a famed novelist all her life. In fact, she worked for Amnesty International as a bilingual secretary for some time. In 1990 she began writing her first novel, Harry Potter and the philosopher's stone. It took her a full seven years to complete the first novel of the series. Click on her picture to view a full biography from her website.

Published between 1997 and 2007, the Harry Potter series has made reading cool again. Well, arguably cool. In all honesty, in 1997, I was in middle school. Most kids thought reading was lame; however, when Harry Potter was published, kids were lined up at the local library begging for the first novel in the series. My friends and I would line up at the book store on release nights...That's right, I said bookstore. Forget the movies, we were in competition to be the first to finish the novel. Forget texting or facebook, we'd lock ourselves in our rooms with doritioes, pizza, and soda, flipping through the pages at an unprecedented rate. Our parents were shocked that the 11 hours we had spent in our rooms were filled with reading, and when we emerged to go to the bathroom, our books were still clutched in our hands. Yes, it was that good.

Another 5 years later, the series continues to be a favorite among young children. Those who failed to read it as youngsters tend to dismiss the series. But those who grasped its importance at a young age, still tend to value the fantastic elements J.K. Rowling brought to life. Today we have numerous series with mythical, fantastical elements, but honestly, until Harry Potter most readers shied away from this genre of reading.